Brexit outcome – what to do next?

Boris Johnson borrowed shamelessly from the film Independence Day to make his final rallying call before the referendum vote last Thursday, saying June 23 would become Britain’s “independence day”. Well, anything Boris can do, we can do too.

Here’s another quote from the same film. As the alien spacecraft’s gather over the world’s big cities, press secretary Constance Spano says to President Thomas J Whitmore ”What are we going to do now?” The President replies: “Address the nation. There’s a lot of scared people out there.”

ITV’s Political Editor Robert Peston wrote on Friday he “and all relevant broadcasters and journalists told you day after grinding campaign day that Leave would be a journey into the unknown” and admitted he and many other commentators got the outcome wrong because they underestimated people’s willingness to take that trip.

So the UK has begun that journey. And now communication becomes even more important. We have a few facts – the referendum was an advisory vote and not a mandatory one, so there’s no legal impact until the government invokes article 50 and starts the mechanism to leave. Which means all EU laws are in place and the UK is still paying its fees.

Factual communication like this is important, but the real type of communication urgently needed after this seismic demonstration of public dissatisfaction with the status quo was beautifully demonstrated by London Mayor Sadiq Khan. He wrote on Twitter: “I want to send a clear message to every European resident living in London – you are very welcome here.”

Many companies in the UK have some sort of foreign ownership. Other companies rely on European markets to sell their goods.  Still more use imports from Europe to make the products they sell. Non-UK nationals make up a great deal of our workforce. We have mortgages and we have savings. All of the above are potentially impacted by the referendum decision and communicating reassurance like Mr Khan is what is desperately needed.

Twitter and social media are beginning to be filled with messages from CEOs and executives.  The CEO of conglomerate Unilever Paul Polman was just one business leader to tweet saying: “The most important thing to have long term prosperity is to accept the will of the people and respect democracy. Now we all need to unite”.

Video can be an important part of the message of reassurance. Words on Twitter are important, but the power of video is that we can see the person speaking and we can literally see their sincerity. We relate to how they look and it takes our understanding of the message to a new level.

Sometimes there is nothing to say – but saying that is just as reassuring. As Robert Peston and his colleagues reiterate, we don’t know what is going to happen next. There’s a quote by historian Cyril Northcote Parkinson,  that a failure to communicate causes a vacuum and that vacuum can be filled with misinformation, drivel – and poison. Whatever happens on this unknown journey, keep communicating so the poison is kept to a minimum. 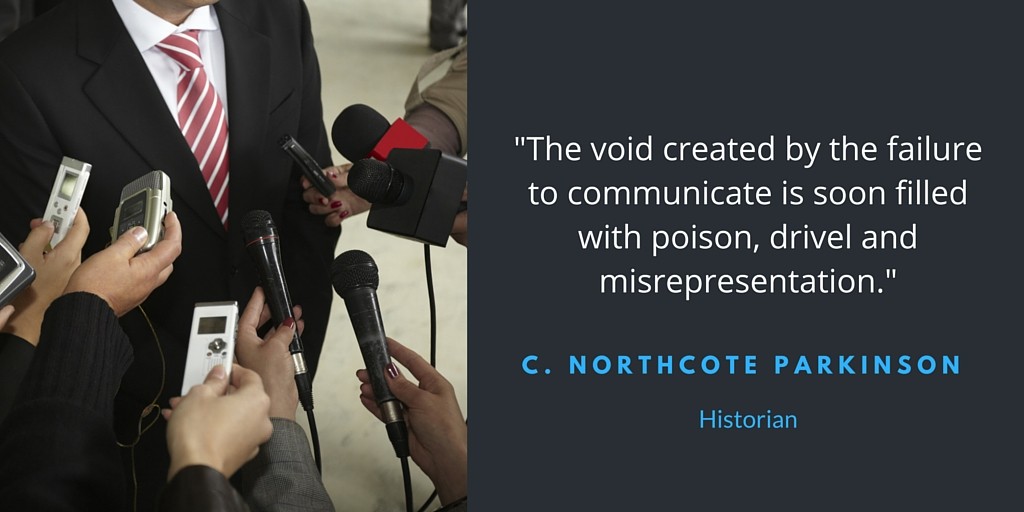